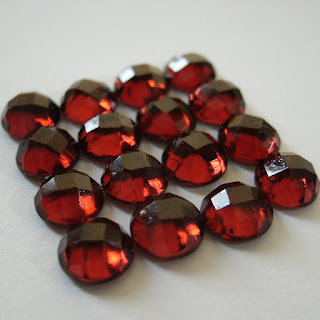 The American Association of Jewelers, in 1912, decided which gemstone would be the official stone for each birth month. Garnets, as we know, have been chosen for January. Garnets are also used as gifts for the 2nd and 6th wedding anniversaries.

Garnet is a very durable stone ranging on the Mohs scale of hardness at a 7 to 7.5. The oldest known garnet finding was on a necklace worn by a young man in a grave dating back to 3000 B.C., which is proof of the stones durability.
Garnet is actually the name of a family of 10 different gems that have a similar chemical structure, the main difference between the stones is in the variation of color, density and refractive abilities. Another interesting fact that I did not know about was that the garnet spans a variety of colors, all except for blue. Of course, they are best known in a variety of deep red.

The U.S, (Arizona), South Africa, Argentina, Australia, Brazil, Myanmar (Burma), Scotland, Switzerland and Tanzania are all areas where garnets have been found.

Throughout time, there have been many ancient traditions and legends about the garnet. They were believed to have healing, strength and protective powers. It has been said that the garnet can cure the wearer of all disease and preserve his health, bring him honors and protect him during times of travel. In medieval times, the stones were thought to cure depression and protect against bad dreams. According to legend, Noah used a finely cut, glowing garnet to illuminate the ark during the dark, rainy days and nights. Christian tradition considered the blood-red garnet as a symbol of Jesus' sacrifice. The Greeks believed that it guarded children from drowning.

The King of Saxony is said to have had a garnet over 465 carats in size. I just had to include that fact. I would LOVE to see that. What an incredible stone that had to have been.

HOW TO CARE FOR YOUR GARNET
As with most gemstones, it is important to protect your garnet from harsh blows, extreme temperatures and chemicals. You can clean your garnet with soapy water and a soft brush. Rinse the stone well after cleaning it. You can also use an ultrasonic cleaner for all garnets except the demantoid variety.
at 10:16 AM
Email ThisBlogThis!Share to TwitterShare to FacebookShare to Pinterest
Labels: birthstones, Jewelry Articles, Mary Ann Testagrossa