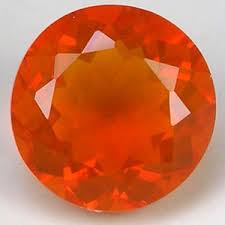 Fire opals are unique in the lush world of the opals. The Mayas and Aztecs loved this gemstone and liked to use it in mosaics and for ritualistic purposes. They called it quetzalitzlipyollitli, the 'stone of the bird of paradise'. Yet one day, the gemstone knowledge of Mexico's natives, which had been handed down from generation to generation, somehow sank into oblivion for a long time ...

... until, in or around the year 1835, the fiery treasures hidden in the Mexican highlands were remembered, and work was gradually begun on the systematic mining of the places where they had been found. Today, the fire opal is regarded as the national gemstone of that country.

It is in Mexico that the most significant fire opal deposits in the world lie. Sometimes, these orange-red gemstones are also found in other countries, in Honduras or Guatemala, in the USA, Canada, Australia, Ethiopia and Turkey, but these are mostly sites of little or no economic significance.

The fiery, warm glow of the fire opal beguiles jewel enthusiasts the world over. The fire opal, with a hardness of between 6 to 6.5 on the Mohs scale, is among the somewhat sensitive gemstones which require a protective setting, especially when worn as a ring stone.

Fire opals are either faceted - that is, as far as their transparency allows - or cut as a cabochon, since this is the shape which best brings out the rich glow of this orange jewel. It is the oval which is regarded as the classical shape for valuable fire opals.

In spite of their relatively low hardness, opals are not actually that easy for the cutter to work with. When setting up the cut, he must pay attention to the direction in which the stone shows its play of colour to the best advantage.

The tolerance of the fire opal to extreme heat is just as poor as its resistance to acids, alkaline solutions and sharp objects. Very unfavourable conditions compel the opal to surrender its moisture, which can make it cloudy and cracked. Like all opals, it should not be exposed to intense light over long periods. However, it loves to be worn a lot, since this enables it to maintain its water balance, using the moisture of the wearer's skin and that of the air. Having said that, it should be protected against contact with cosmetics. Fire opals which have become matt through being worn a great deal can be repolished.

Play of colour, body colour and transparency are the three criteria which determine the price of a fire opal. The more transparency and 'fire' it has, and the more intense the deep red of its body colour, the more valuable it will be. These gems, which glow from orange to red, are treasures which appeal most of all to active people with a positive approach to life. Their warm, fiery colour gives us vigour, fills us with the joys of life and opens our senses to the beauty of Nature.