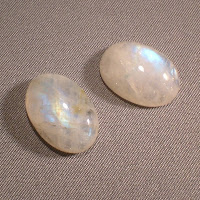 Currently one of my favorite gemstones is moonstone. When I found out it was June's birthstone, I knew I wanted to write about it.

Moonstone is part of a family of gemstones known as feldspar. It is an opalescent gem that always has a white or blue sheen that reflects light. It looks like it has a glow from within the stone. In a moonstone, this glow is called adularescence.

Moonstone's clarity ranges from transparent to translucent, and comes colorless, in a milky white, yellow, orange, peach and gray. Moonstone will pick up the colors you wear, which makes it a very versatile gemstone. One of the colors it looks best with is black. The radiance of the stone is stunning with black. 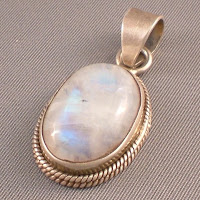 Around 100AD, moonstone was used in jewelry by the Romans who believed that the stone was formed by the light of the moon. In India, moonstone is considered a sacred and magical stone. It is believed to bring good fortune, enhance passion, protect women and children, mothers and babies, and to balance the emotions. Moonstone was very popular during the early 20th century and was used extensively in art nouveau jewelry.