I seem to be running a bit behind again with my birthstone articles. I did start this in June but as you can see, it did not get finished till now. 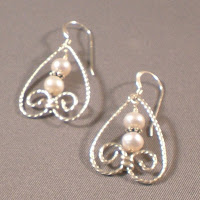 While looking up information on June's birthstone, I came upon 3 gems for the month: the pearl, moonstone and alexandrite. The pearl and moonstone are considered "modern birthstones" in the U.S. The list for these stones came from the American National Association of Jewelers, the Jewelers of America, in 1912. Alexandrite is considered June's birthstone from the "traditional" list of birthstones complied from ancient cultures. For the purpose of this article, I will start with information about the pearl.

I have written about the pearl and pearl care before so I will try to be brief here. Pearls are not really considered a gemstone. A natural pearl is formed when an irritant such as a grain of sand makes its way into a mollusk, clam or oyster. The mollusk, in defense of the irritant, secretes a fluid (nacre) to coat the irritant. Layer upon layer of this fluid is coated on the irritant until a pearl is formed. This natural, organic process creates a freshwater pearl. Cultured pearls are manmade by humans placing an irritant inside a mollusk or oyster and caring for them in a protective environment. 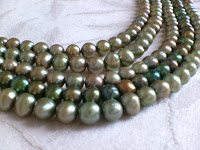 Natural pearls are very rare. The Persian Gulf, Australia, Japan, Mexico, Panama, Venezuela and the Micronesian Islands are some of the sources for the natural pearl. Most pearls available today are cultured or manmade pearls.

Pearls were once considered a financial asset, valuable because they were so rare. Thousands of oysters had to be searched to find that oyster that held a single pearl, created merely by chance. They were so valuable that they were comparable in price to real estate. During the time of the Roman Empire, the pearl was considered the favorite gem of the wealthy. Roman women wore their pearls to bed so that upon awakening, they could be reminded of their wealth. 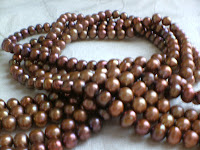 Pearls are quite soft and less durable than most gems. Special care should be used to keep your pearls in good condition. Pearls are sensitive to acids, dryness and extreme humidity. Apply any hairspray, perfume or cosmetics before you put on pearls. Human sweat and the oil from your hands can dissolve the pearls luster. It is recommended to wipe your pearls off after wear. Do not leave pearls exposed to direct sunlight or they will turn yellow or fade. Do not use an ultrasonic cleaner and always be careful as to how you store them.
at 6:16 PM
Email ThisBlogThis!Share to TwitterShare to FacebookShare to Pinterest
Labels: Birthstone, birthstones, Mary Ann Testagrossa, Pearl