History of the Wedding Ring 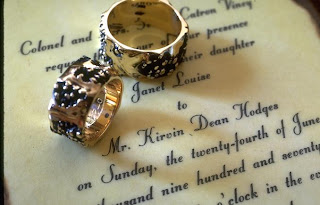 The history of the wedding ring began in Northern Africa with the Egyptians. Egyptians settled along the fertile Nile river gathered sedges, rushes and reeds from the flood plains and twisted and braided them into rings for fingers and larger ones for bracelets. The Egyptians believed that the circle was the symbol of eternity, and so then, were the rings.

These rings were worn on the same finger as today, the fourth finger of the left hand, because it was believed that finger had a vein that led directly from the heart. When the Greeks conquered Egypt, they carried on this tradition, and then it passed onto the Romans. The Romans also believed in the ring finger and the vein from the heart, but instead of giving the ring as a token of love, it was seen as a symbol of ownership. A man laid claim to his woman with giving the ring.

These early wedding rings lasted at most a year from regular wear and so other materials were sought after for use. Leather, bone and ivory were then fashioned into rings and used in the same way.

In Asia, puzzle rings were popular for wedding rings. These rings came apart if they were taken off the hand and than had to be put back together by someone who had the knowledge to do it. Middle Eastern men often gave these rings to their wives as a way of knowing if they were being loyal to them or not. Remember, if the ring came off, it came apart. Very clever.

The earliest known wedding rings made of metal were very akward and unrefined. Gemstones were added to make them more attractive. This can be seen in Eqyptian heiroglyphs. At this time, jewelry was more to show wealth than for sentimental reasons.

In early Rome, iron was the chosen metal for rings while others were using copper or brass. Iron symbolized the strength of a man's love for his wife. It also was a sign of ownership. The woman became the property of the man. 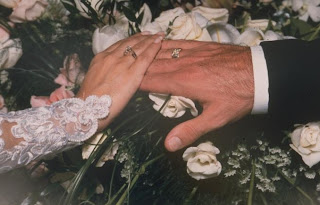 Silver became the metal of choice in 17th century England and France. Poesy, or posy rings, were widely popular then. These were rings inscribed with a love poem, and some reference to faith and hope included in the verse. Silver was also popular in renaissance Italy for engagement rings, decorated with enamel engraving.

In medieval Europe, coinage gold was used to make rings, with gemstones added. Rubies were often chosen because their color red was like the color of the heart. Sapphires and diamonds were also used.

(Article sources: Ezine Articles, "The History of Engagement Rings and Wedding Bands" by Reno Charlton and "The History of the Wedding Ring-A Recognizable Symbol of Love" by Matt Jacks)